A place, a user/visor and appliances are all actors using the same network protocol and RPC mechanics, implemented in the allonet library.

Allonet multiplexes these over UDP using enet. The plan is to wrap this in TLS.

An alternative plan has been to use WebRTC as the transport for free TLS, ICE, udp punch-through, etc. We might still do that in the future, if a nice open source library appears.

Entities and the place state

Entities are things in the world, represented in a scene graph. An entity has only an “id” and a list of components. There is a list of specifications for official components. Apps may invent additional components without them having to be part of the standard.

Interactions are the way entities can communicate, including how the visor talks to the place itself (by sending to entity id place). It’s a json list for now, and the idea is for it to be a pub-sub request-response protocol vaguley inspired by Peter J Robinson et al’s Pedro protocol.

The documentation has a list of specifications for official interactions, but again, apps and visors can invent their own beyond the specification.

The alloplace server becomes the Pedro gateway, and can thus manage access control lists, defined as guard expressions on the expression itself, the sender and the receiver. See the implementation task for more information.

These ACLs can then control everything needed:

The alloplace server holds all the state and takes care of all the logic. It is the world state, RPC and media transit hub.

I’d love to support different visors: VR, AR desktop 3D and touch. For now, the focus is on the VR visor in Lovr.

alloplace://(enet endpoint)... URLs can be opened to make a visor open a place.

A visor should provide some sort of client identity. The idea for now is for each client to provide a public certificate with a name bound to it, so you can at least know when the same client appears again. Would love an architecture idea for a distributed identity plan (web of trust?).

If we end up going with webrtc, the enet endpoint should be replaced with a https endpoint that takes a POST of the SDP for an OFFER, and responds with the ANSWER.

Appliances are written in any language and interact with the allonet library acting as a “UIKit” for XR UI. 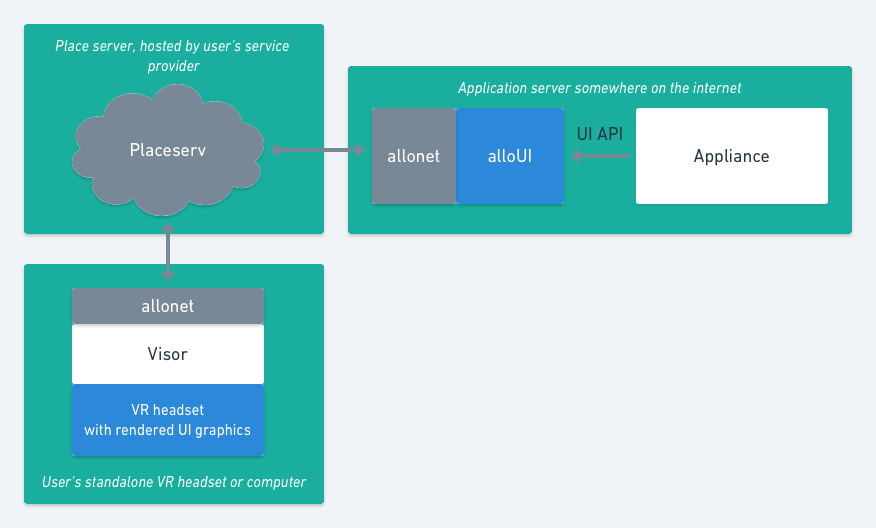 While appliances can use the allonet API directly, it uses low-level primitives that are not great for building 3D UIs. The plan is to create an “Allo UI” UI kit API on top of allonet that spawns entities, shares textures etc as necessary to provide the UX and UI interactions that Alloverse standardizes on, providing an intuitive and uniform experience across appliances without every application developer having to think of their own interaction patterns.

If a user opens an alloapp+http(s)://..., it should be opened by the visor. The visor should then send an interaction to the alloplace server, asking it to spawn the given appliance.

The alloplace server should then make the http(s) call to the given URL with a connection instruction json blob:

The http server receiving this request should then spawn a process for this agent and have it connect to the spawnInPlace URL. See the implementation task for opening appliances with URLs.

The plan is to provide a generic “alloapp gateway” node script that responds to requests like the one above which can be easily configured to spawn a process like the above, so that all an app developer needs to implement is a process that takes a place URL in ENV (or the whole json as above), and then asks the allonet API to connect to that URL.

Entities should have components representing assets such as:

They should reference these assets by sha1 hash. When a alloplace server sees a new hash in the description of an entity coming from an agent, it should ask that agent for that asset hash over the asset channel. The agent should then stream the asset to the server for caching and redelivery.

When another agent then sees the references to the assets, it can thus then ask the alloplace for the corresponding asset, so that it can then later display it.

Dynamic textures and audio will later be represented as webrtc streams, and thus not considered assets the same way. Placeserv then acts as an SFU.