Your “Place” is where you decorate, run apps, invite people, and hang out. It’s like a collaborative X11 server: It runs a world simulation server, a voip gateway, and all the backing data for 3d UIs for the running apps. The reference Elixir implementation is in alloplace. A “visor” is the GUI application you use to visit places and interact with your apps. allovisor implements such a visor for VR in Unity. An “app” is a process running on your computer, or on a computer on the Internet. Like opening a web page (or launching a remote X11 process), this app can then show its interface and be interacted with inside your place. The network and “UI protocol” is abstracted into the allonet library, written in C and used by all the above projects.

An Alloverse app is a server-side app that you run on your own server, similar to how you would host a web app on your own server. The difference is, when a user goes to your app on the web, it loads into that user’s web browser on their computer; but when a user goes to your alloapp in an Alloverse Place, the app loads into the Place for all users in that Place to use, and your code gets collaboration and VR super-powers for free.

This tutorial will take you through creating an Alloverse app using the Lua programming language, since that is the language we’ve developed the most support for so far.

You can build apps on Mac, Linux or Windows; but for the latter, you’ll need a Unix shell, e g mingw, msys2 or WSL.

In contrast to a web framework like Rails or Django, Alloverse doesn’t install any software onto your system. Instead, a project is completely self-contained within its project folder, and contains everything it needs to run.

To write your own Alloverse app, you’ll need the following:

Let’s begin by opening the window to Alloverse by getting the Visor running and connected to a Place. Open the app you just downloaded, press the “Connect” button and enter “Sandbox” in the input field. Alternatively, if you’re on a Mac, clicking this link will automatically do the above for you.

That’s it - you’re now inside the Alloverse Sandbox Place, providing you a way to view and interact with the app you’ll be developing in the next step.

Now, let’s create a project folder. Allo Assist requires Git to fetch all its dependencies, so we’ll init a Git repo in the folder. Then we can initialize the alloapp environment into it:

If all went well so far, you should now be able to run ./allo/assist help to review all available commands. This might also be a good time to run git commit -a, so the next commit only contains your own changes.

Anyway, the curl’d script will have created this project structure for you:

Trying your app out

You should now be able to make your app appear in an Alloplace! In the terminal, run the following command:

If everything checks out, go to the Alloverse Visor, where you should be able to see and interact with the app and its button. (If you’ve moved around in the place, you may need to look around to see it)

Our app running in Nevyn’s place. I’ve clicked our simple app’s orange button button three times, and the laws of causality held up, printing “Hello” thrice to our terminal.

At this point, you could go off, do your own thing, read the documentation as you go. Or you could keep reading, and be guided through the development of a simple but functional todo list app, which will help establish the fundamentals and make it much easier for you to build real, complex apps.

If your app ever disappears, take a look around in the Alloverse to make sure you’re not just looking in the wrong direction. If you still can’t see it, it might have crashed. Check out the terminal from which you ran it - there should be error messages to help you figure out what went wrong.

This is also a good point at which to remind you: if you get stuck, or have questions or feedback, please hop on Discord and give it to us straight.

Anatomy of Hello World in the Alloverse

Let’s open up lua/main.lua and have a look at the code, to understand what’s going on. If you’re not much for theory, you may skip this section and get straight to making an app.

Above, we’re using a Client to connect this app to a Place. arg[2] is the URL of the place to connect to, which Assist sets up for you in boot.lua. App then manages the Client connection for you, and manages the lifetime of your app.

Assets are files (images, glb models, videos, sounds, etc…) that you want to use in your app. They need to be published so that users’ visors can download them before you can use them. We make assets global so you can use it throughout your app.

Your application is represented by a hierarchy of views. If you’re a web developer, you can think of it as nested elements in a DOM. If you come from Unity, it’s similar to the GameObject hierarchy, with transforms being relative to parent GameObjects. If you’re an oldschool Macintosh Toolbox developer, I’m sorry.

app.mainView is the main UI for your app. You should set it up with your main user interface before connecting to the Place.

Bounds is the position and size of your object:

We also make the main view grabbable, so the user can move it around the Place. Alternatively, you can add a GrabHandle, which acts like the title bar of a desktop UI’s window.

The standard template has created a standard Button component for you, at 2 decimeters wide and tall. Its position of 5 centimeter down and forward is relative to its parent - in this case the mainView.

The onActivated callback lets us run code when the button is pressed. This’ll print “hello” to your local terminal when you run the app on your machine (even if you’re running the visor somewhere else on the Internet)!

Finally, the template has configured the app’s mainView to use this dummy UI. Then, it connects to the Place we’ve been asked to run in, and finally hands over the runtime of the app to the UI framework so it keeps running until the user quits it.

Now that we got the gist of how to compose an app like this, we can replace it with something useful.

Let’s make a todo list app! I’m a master artist, so I’ve painted this piece of art to represent our goal: 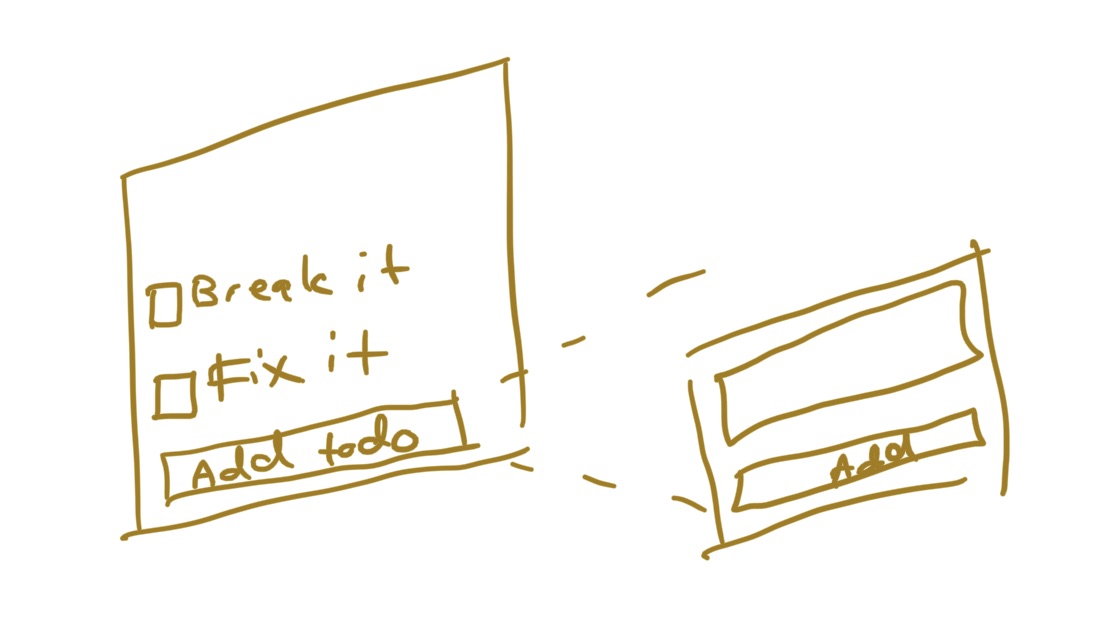 Note: This is where we start coding for real.

Select everything from (and including) local mainView = ... down to app.mainView = mainView and delete it, and we’ll write some new, fun code.

Instead of having a bunch of loose views strewn around the code, I enjoy creating a class for each main container of UI. Some equivalent of a “window”, or “view controller”, or “component” if you will. Let’s create a TodosView, which will display the list of items, and allow you to quit the app, and add new items. Copy the code block below, and paste it between app.assetManager:add(assets) and app:connect().

We’re using Penlight’s class macro to create classes. We inherit ui.Surface, which is like a ui.View except it also draws a background, so our app gets a backdrop to rest our controls onto.

We create a constructor, where we set up initial state and controls. Here we want a quit Button, and an add Button. We immediately add them as subviews to the TodosView, so they show up in the view hierarchy. For the first button, we use one of our image assets as a texture, and for the other, we set the text on the label instead.

AlloUI doesn’t have a comprehensive layout system instead, so we’ll call our own layout at opportune moments. Let’s stub it out so we have something to start with. We’ll also create an instance of it, and use it as our app’s main view. Paste the following into your code, just below the _init function:

Fire off a quick ./allo/assist run alloplace://sandbox.places.alloverse.com in your terminal, and you’ll be presented with this beauty in Alloverse: 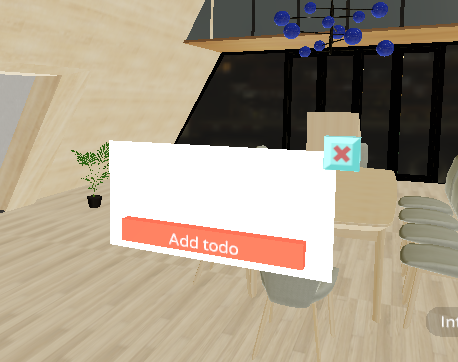 We’ve created a VR interface, how cool is that!? Just keep in mind that while the “Add todo” button is is visible, clicking it will cause the app to crash. So, let’s attach some functionality to it: let’s make it create that popup for inputting new todo items. Paste the following code block right underneath the layout() function:

Phew, that’s a handful. Let’s step through it.

The cool thing about this popup is that if you have multiple people in the room, they can all get their own input popup, so they can add their own items without interfering with each other. This is an important and unusual aspect of UI design and development: all your UI is real time collaborative, so you have to consider how your application behaves when multiple people use it at the same time.

For example, if you had added the input field directly to the main view, only one user would’ve been able to add items at a time, and they’d likely have interfered with each other’s work. By using a personal popup, users can work naturally collaboratively and in tandem.

Here’s what this new fancy popup should look like once you tap the “Add todo” button: 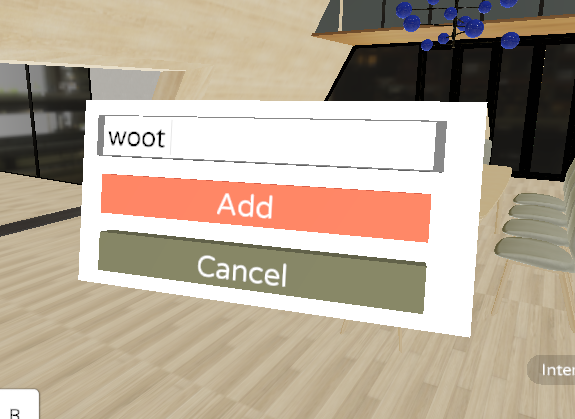 checkmark.png and put it in images/. Then, refer to it in assets (next to the quit button texture) in order to publish it:

This should start to look familiar.

removeTodo just finds the given item in the list, and removes it from both the list and the UI, running a relayouting pass to adjust the other items’ positions.

That’s awesome! We can now add and remove todo list items! Just one bummer: they all end up stacked on top of each other. We’ll need to lay them out before this is usable. Let’s replace our dummy layout with something better.

Here’s a pattern I’ve brought with me all the way back from building black-and-white Mac apps in the 80s: using a pen variable which represents a rectangle (or rather, a 3D box!) where we want to “stamp out” our UI, moving the pen as we walk through our items.

You know what? I think this is pretty stellar. This’ll do nicely. If you dotted every i, your app should look something like this:

So, you built your fancy VR app. Now you want to show it off, and deploy it so all the Alloverse users in the world can run it in their places, right?

Well, you’re in luck! Go ahead and learn about hosting an Alloverse app!

If you made it this far, go eat a cinnamon roll, you deserve it. It’s on me. Really, just ping me on Discord and it’s yours. We’d at least love to hear from you, and see your creations.

Once you make your own apps, even if you’re not down with cinnamon rolls, do let us know, so we can feature your app in our app browser, blog and tweet about it, etc etc.

Running your own Place server

If you’re feeling ambitious, you can boot a Place of your own using the docker run -e ALLOPLACE_NAME="my place" -p 21337:21337/udp -it alloverse/alloplace2 command. In the Alloverse connect input, enter the name of the place you just created.